As tourists from around the world flock to London this summer, the Team London Ambassadors are taking to the streets again, ready to welcome visitors to the capital at hotspots across the city and show that London is open to all.

Today, Dame Barbara Windsor DBE joined the Ambassadors in Trafalgar Square. The actress has been an enthusiastic supporter of the Ambassadors since the volunteering programme launched ahead of the London 2012 Games.

Team London is supporting the Mayor’s #LondonIsOpen campaign, launched in the wake of the EU Referendum to show the world that London is united and open for business, and people of all backgrounds and nationalities are welcome.

The Ambassadors themselves come from a wide range of backgrounds, reflecting the diverse nature of London’s population, and speak over 50 languages between them including Cantonese, Chinese, Hindi, Italian, Punjabi, French, German, Spanish and British Sign Language. Those who speak a second language wear a badge, making it easier for tourists to seek help in their native tongue.

I am thrilled to join Team London Ambassadors today at Trafalgar Square. As the 2016 Olympic and Paralympic Games begin in Rio de Janeiro, it’s fantastic to see how strong our own Games legacy is here in London, with many of our volunteers beginning their journey back in 2012. Our 550 Team London Ambassadors hail from countries around the world and are doing a brilliant job of showing London is truly open to visitors from all corners of the globe. Team London is a wonderful initiative, getting Londoners out there volunteering for our city, giving tips and advice to visitors and making sure London remains the greatest destination in the world. Dame Barbara Windsor DBE

As excitement builds for the 2016 Olympic and Paralympic Games in Rio de Janeiro, I am pleased that our Team London Ambassadors will be back out on the streets again this summer, showing that London is open and ready to welcome visitors from all corners of the world. Sadiq Khan, Mayor of London

I love being a Team London Ambassador and it’s especially brilliant to be joined in Trafalgar Square by Dame Barbara Windsor this morning, meeting tourists  and visitors from around the world, sharing our local knowledge and love of our great city. I’ve been an Ambassador since 2012, leading teams of volunteers at events across the capital. My team comes from all corners of the capital and they’re always enthusiastic to share our love of this city. We’re here to show the world that London is open to everyone and I look forward to welcoming many more people to the capital this Summer. Team Leader Francette Albin

In my day job, I work for Great Western Railways, Paddington Station, and have the pleasure of interacting with visitors to London every day. I’ve volunteered at every major event across the capital since 2012 and have loved every second, working on a team with people from all different backgrounds and languages. When I was given the opportunity to become a Team London Ambassador this year – I leapt at the chance! There’s nothing I don’t know about how to navigate round London – I love sharing this insider knowledge with visitors and locals alike. Adeniyi Tella, Team London Volunteer 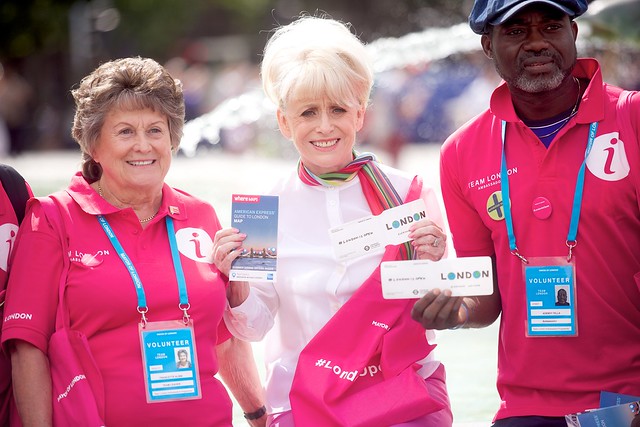 20 September 2019
On 19 September we celebrated the London Enterprise Adviser Network with a celebration awards event.

Young Ambassadors are making a difference

21 January 2019
Young Ambassadors inspire with their social action projects on a range of topics, from homelessness to mental health

Students get to network with the best